Get to Know Swiss Chard: Top Tips and Recipes

Chard, also called Swiss chard, is a leafy green that comes from a variety of beets grown for the edible stems and leaves rather than the root or bulb. Known for its colorful stalks, chard can be consumed raw or cooked depending on preference. Stems are often big and crunchy, while the leaves are tender and mild, with a hint of bitterness that diminishes with cooking. Read on for more info on chard, plus recipes to try.

When Is Chard Available?

Chard is a biennial crop that grows from April to November and is available year-round. It is unique in that it does well in both cool and hot temperatures. Typically, the best time to get chard is in summer, when it is often readily available at farmers markets. Because the leaves are highly perishable, buying locally grown chard is recommended for peak freshness, taste, and nutrient density.

WEBINAR:
The Rise of
Plant-Based Living

Like other leafy greens, Swiss chard is a nutrient-dense, low-calorie vegetable. Chard contains fiber and an array of phytonutrients. Interestingly, chard has a higher sodium content than other vegetables of its kind. One cup of raw chard contains 103 milligrams sodium, about 4 percent of the American Heart Association’s daily recommended allotment—so you may want to add less salt to chard dishes than you would to dishes that star other leafy greens.

While the leaves of chard are always a dark green, the stems can be red, pink, yellow, and even orange and white. Rainbow chard is a blend of the different-color chard plants grown separately; then the stalks are bundled into a beautiful, colorful bunch. Different colors of chard can be used interchangeably, as there’s no significant difference in flavor.

When shopping for chard, look for leaves that are fresh and green and show no signs of yellowing or wilting. Bigger is not necessarily better: Extra-large leaves and ribs may be overly mature and tougher in texture.

When chard is not available, spinach, kale, and beet greens make good substitutes. Spinach and beet greens resemble chard closely in texture and all are  members of the same plant family, Amaranthaceae. Kale has a tougher texture than chard but a similarly earthy flavor.

Can the Stems Be Eaten?

Yes! Chard stems are intended to be eaten. In Europe, chard is often grown specifically for the stems. Stems can be eaten raw like celery, such as a whole stem (stalk) dipped into hummus, or simply chopped into a salad. They can also be cooked. It’s a good idea to separate the stems from the leaves before cooking, as the stems require more time to cook.

How to Store Chard

Chard can be stored for one week, refrigerated at 40°F or below. Wrap unwashed chard in a damp paper towel, then place in a plastic bag, seal, and store in the refrigerator crisper.

Freezing is not recommended for fresh chard. However, blanched stems and leaves can be frozen, separately, in an air-tight, freezer-safe container for up to a year.

Chard is delightful in a variety of dishes, from soups to salads to enchiladas to tacos. These vegan Swiss chard recipes from Forks Over Knives showcase the leafy green’s versatility. Make one today! 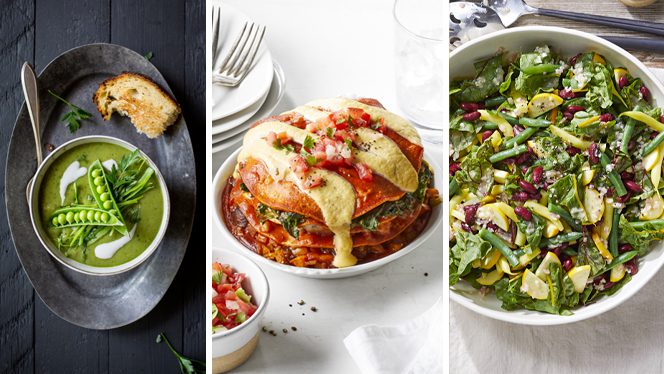 This post was produced in collaboration with the Natural Gourmet Center, a plant-centric culinary arts program from the Institute of Culinary Education.

As Early as Day 3 on a WFPB Diet, I Noticed I Had So Much More Energy