For many years of my life I was “Mr. BBQ”: I never missed an opportunity to get the grill fired up. For breakfast, I was a bacon-and-eggs guy. Then about 18 months ago, after routine blood work, I was told my kidney function was poor. I was already on four blood pressure medications; I also had high triglycerides (a terrible 2,000 mg/dL, believe it or not), and I had crept up to being 30 pounds overweight. So this was not welcome news. The doctor said, “This is serious but not an emergency.”

I was referred to a nephrologist who told me that I had chronic kidney disease (CKD). My glomerular filtration rate (GFR) was 42, which was not good. He said that CKD was irreversible and the best I could hope for was to slow the decline.

Save 25% on Forks Online Cooking Courses

Over the next year, I developed mild atrial fibrillation. I was becoming a poster boy for the effects of the Western diet. In early 2020, I started to look for dietary solutions to my health problems. I discovered keto and thought that it would suit me perfectly, because I wouldn’t have to give up meat. So in early March 2020 I started a strict keto diet, and within a couple of weeks I had lost about 5 pounds. But I wasn’t feeling great. So I decided to get more blood work to check on my kidney function. My estimated GFR had deteriorated to 33! The doctor said that if I went below 30, I should discuss dialysis and transplant options with the nephrologist. This came as a real shock.

Around the same time, I got an email from Netflix that the Forks Over Knives documentary would be removed from the streaming platform soon, so I decided to watch it. The film, which showed that a whole-food, plant-based diet could prevent and reverse many chronic diseases, was a revelation for me. I thought, “Here is the solution to my metabolic problems.”

Earlier this month, after 12 weeks of WFPB, I had additional blood work done to see how my new lifestyle was working so far. When I called for the results I spoke to the manager of the clinic, who started reading the results to me then stopped and said, “This is amazing. I want to show the doctor.” A few minutes later, my doctor called. “This unbelievable,” he said. In just three months, my eGFR had increased from 33 to 50, and my uric acid, creatinine, and triglycerides were all normal. He said that he’d never seen such dramatic results.

Now I’ve gone from four blood pressure medications to two, and I’ve cut the dose in half for those two. My average blood pressure is now 112/70. I haven’t had atrial fibrillation since I started the diet. To cap it all off, I’ve lost 28 pounds.

I’ve been enjoying lots of delicious foods, as well. When it comes to breakfast, I’ve changed from an eggs-and-bacon guy to an oats-and-fresh-chopped-fruit guy. For lunches and dinners, I eat a lot of what I call “chopped bowls,” with grains such as quinoa and buckwheat; veggies such as cauliflower, broccoli, zucchini, carrots, and green beans diced into bite-size pieces; and flavorful dressings such as soy yogurt curry sauce. They’re tasty and completely plant-based. My wife and I also enjoy making homemade flatbreads. Our favorite is topped with hummus, tomato, and bell pepper. I also eat quite a lot of apples and pears every day.

My daughter, Emma, was so impressed with my rapid weight loss and health improvements that she, too, is now a WFPB eater. This transformation has truly been a miracle for me!

Ready to get started? Check out our Plant-Based Primer to learn more about adopting a whole-food, plant-based diet. 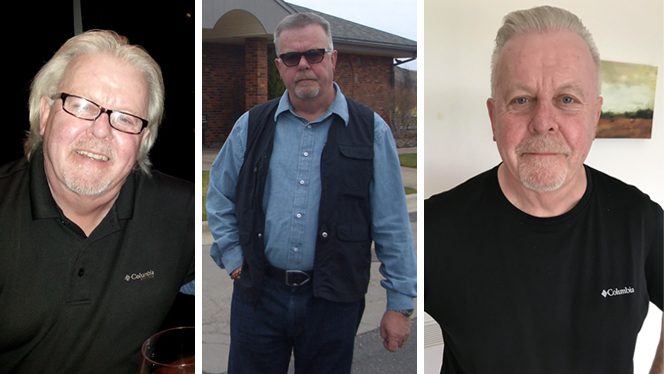