As one of the world’s most iconic sports festivals, the Mr. America competition calls to mind images of top-tier athletes with tan, oiled skin holding angular poses that show off their perfectly ripped bodies. Now, a team of elite athletes is determined to transform the world-famous competition into a platform for plant-based excellence.

Enter the PlantBuilt team—composed of 26 members from around the world—which will take the stage Oct. 7–9 in Atlantic City and represent the sports of bodybuilding, Olympic weightlifting, powerlifting, kettlebell sport, and CrossFit.

“Dani Taylor and I formed the PlantBuilt team in 2015 with one mission: to once and for all dispel the myth that vegans are weak and scrawny,” says PlantBuilt co-founder Giacomo Marchese, who will compete in the Men’s Open and Masters 40+ bodybuilding divisions.

Taylor and Marchese reached out to friends in the community to gauge their interest in participating, and the first PlantBuilt team was born. At the Naturally Fit Games, a multisport expo in Austin, Texas, they commanded the stage in 2013, 2014, 2015, and 2017.

“While we represented 10 percent of the competition, PlantBuilt managed to take home 80 percent of the trophies,” Marchese says. Sara Lee broke a world record in kettlebell; Kody Kowalowski placed first in CrossFit; Torre Washington won the overall in bodybuilding, beating out every bodybuilder in every division; Marchese and Daniel Austin had perfect scores in powerlifting, and both placed first in their weight classes. “Records were broken in several sports, and there were many more gold, silver, and bronze placings across the board over the years,” he says.

Since then, PlantBuilt has competed at two additional events, expanding its team to include more strength-based athletes—and always spreading the message of cruelty-free muscle.

“We are headed to the Mr. America All-American Sports Festival to set a precedent and take home as many medals as possible,” Marchese says. “Our goal is to demonstrate that athletes can be competitive and compassionate at the highest level of sports, fueled solely by plants.”

Jenny Harrison, who will be competing in the bikini bodybuilding professional division, says the team serves as a public display of vegan strength and athleticism. “There’s this preconceived notion that vegans are weak and frail,” she says. “We want to show the world that you can build muscle just like the strongest animals that roam the earth.”

After losing her father to a heart attack 11 years ago, Harrison became interested in learning how to live a healthier lifestyle. “Veganism kept coming up again and again, and that was around the same time the Forks Over Knives documentary came out,” she recalls. “It was kind of this perfect storm that made me think, Oh, I gotta go vegan.”

Plants Have All the Protein You Need

Despite their impressive form and athletic achievements, members of the PlantBuilt team report facing the same query that many vegan athletes and vegans in general hear: “Where do you get your protein?”

“This one doesn’t seem to be able to be put to bed,” Marchese says. “I get it. As with any dietary shift, there will be some fear and uncertainty. The truth is, you can get more than enough protein to meet your needs as a highly competitive bodybuilder or strength athlete from plants. Once you are familiar with plant-based foods, it’s actually quite easy. Plants have all the protein you need.”

In fact, ditching meat and dairy may provide athletes with a competitive edge. Whole plant foods offer not only dense nutrients but anti-inflammatory properties that help fight injuries.

“Strength comes from being able to perform, recover, and train consistently,” Marchese explains. “When I went vegan 18 years ago, my recovery time improved. Even when I’m deep in competition prep for my next bodybuilding season, I can easily train upward of seven days in a row while still recovering well. In the off-season, I can train up to two weeks in a row without rest.”

The team’s ultimate goal, he says, is to “represent for the animals, for the environment, and to show what compassionate, healthy bodies can truly do. We are fueled by the healthiest foods… and for the right reasons.”

The Mr. America competition will be streaming live via the All Sports Network, which is available via Amazon, Hulu, and Roku. 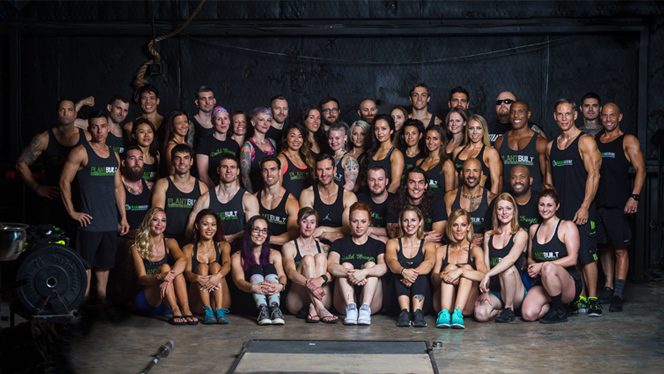 Webinar Replay: Going Plant-Based: How to Get Started and Stay in the Game with Tim Kaufman

Webinar Replay: Going Plant-Based: How to Get Started and Stay in the Game with Tim Kaufman