From Chris Paul to Venus Williams to the Tennessee Titans, more and more pro athletes have been going plant-based in recent years. Now the movement appears poised to catch on in America’s oldest professional sport. We spoke with Ryan Sherriff, a 32-year-old relief pitcher currently with the Philadelphia Phillies organization, about ditching animal products, pitching in the World Series, and navigating the ups and downs of life as a pro ball player.

Last year, you sparked a conversation about mental health in baseball when you opened up about your struggles with anxiety. What drove you to speak out?

There’s a lot of stigma around mental health issues, especially for guys, who often worry about seeming weak. I think being vulnerable is not a sign of weakness. It’s a sign of strength. And I know there are a lot of athletes out there who struggle with the same things I do—dealing with perfectionism, struggling to have a job, living their life in the unknown, like we do in baseball.

What inspired you to go plant-based?

I was flipping through documentaries on Netflix, and I found The Game Changers. I’ve always been interested in health and nutrition, so I put it on while I was cleaning—and then I just got sucked in. I’d been feeling really lethargic. I was getting sick a lot and didn’t know why. I was eating a lot of steak, a lot of chicken, a lot of eggs, and I always felt gross. My strength wasn’t up. I was with the [Tampa Bay] Rays at the time, and when the documentary ended I texted the team registered dietitian, “What do you think about going plant-based?” She said she was all for it and that she’d send me everything I needed … articles, etc. So I had really good resources.

Have you noticed changes since making the switch?

My strength is through the roof now, and I can last forever in my workouts. My recovery is great. But the biggest takeaway for me is that my mood changed. So I did some research on that, and found out that something like 90 percent of your serotonin is [produced] in your gut. I think having that good bacteria in there has made a big difference. Before, I was always a little cloudy, a little foggy, a little angry. Now, I’m much more Zen.

How have other players responded?

The biggest question I get is, “Where do you get your protein?” I tell them to go to the grocery store, pick out a can of beans, and look at the Nutrition Facts on the back: Half a cup of beans has about 6 to 8 grams of protein. So you put a full cup in your bowl and you’re already getting 16 grams of protein just from a cup of beans. Add to that a little bit of lentils, and you’re easily at 30 grams, just with one meal. … I always thought that you had to eat meat for protein, but I was totally wrong.

What was it like to pitch for the Tampa Bay Rays in the 2020 World Series?

Highlight of my career so far, 100 percent—that was better than my major league debut. I could not feel my legs, to be honest. But it was a super cool experience. And what made it even cooler was pitching against [my hometown team] the Dodgers. I loved it. I brought my best friends out from LA for all six games.

Pitching in the majors means performing at your best under extreme pressure. To stay grounded on and off the field, Sherriff relies on two daily practices.

When Sherriff was going through a rough patch in 2019, a team sports psychologist gave him a journal. Not a fan of writing, Sherriff says he was reluctant to accept the gift. “But he encouraged me to just start with ‘I am thinking about…’” says Sherriff, “and then to write down everything that came into my head.” He found the approach freeing. “Now I love journaling. It helps bring me into the present moment. I’ve noticed that I’ll often start out writing down negative thoughts, but by the time I’m done, it’s flowing toward positive thoughts.”

Sherriff estimates that over the past few years, he’s logged 100 hours meditating. He prefers guided meditations, which he finds on YouTube and through apps such as Headspace and Breethe. “I especially love Breethe, because it has short, five-minute guided meditations and guided meditations with different focuses: abundance, gratitude, relaxation, etc.” 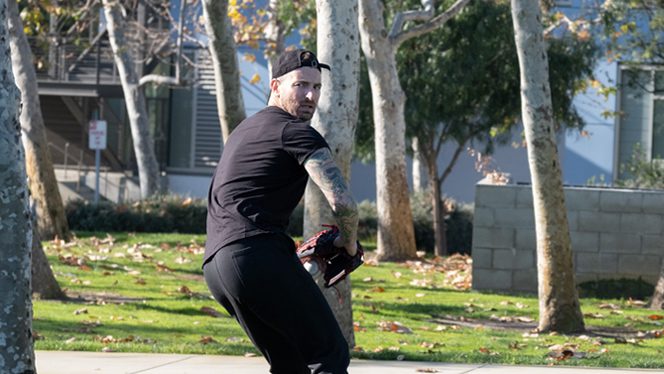