Everything you need to know about one of the best-loved, most versatile foods in the world: potatoes. With potato selection and storage tips, basic cooking methods, blueprint recipes, and a rundown of which varieties are best for what, this guide has got you covered.

In the field or garden, a potato is a tuberous root vegetable. It’s a member of the nightshade family of plants along with tomatoes, eggplants, and peppers.

Nutritionally speaking, potatoes are considered a carbohydrate because their flesh is primarily made up of starch.

Sweet potatoes and yams are also root vegetables, though they belong to a different botanical family altogether. Sweet potatoes are very similar to potatoes when it comes to nutritional makeup, but they have about 50 percent more fiber than potatoes.

Potatoes sometimes get a bad rap thanks to their association with greasy french fries and potato chips. But it’s not the potatoes that make those foods unhealthy; it’s the oil and salt. Potatoes, in and of themselves, are as nutritious as they are delicious, an incredibly healthful source of starchy satisfaction (which is why they’re a foundation of a whole-food, plant-based diet). And no, carb-rich whole plant foods such as potatoes will not make you gain weight, as long as they’re prepared healthfully.

Can You Eat Them Raw?

No, you can’t eat potatoes raw—but why would you want to? If you’ve ever crunched into an undercooked potato (it happens), then you know raw potatoes are mealy and bitter. Cooking potatoes makes their starch molecules digestible and eliminates compounds that may be toxic when consumed in very large quantities.

When Are Potatoes in Season?

Young, new potatoes are harvested about two months after they have been planted, usually in the spring. Fully mature potatoes come out of the ground in the late summer or early fall. Like many other root vegetables, potatoes keep well in storage and are available year-round.

Potatoes keep best when stored in a cool, dark, dry, well-ventilated place. Avoid storing potatoes in a plastic bag or tightly closed container that prevents air circulation. And never, ever store anything but cooked potatoes in the fridge or freezer. Cold temperatures will turn the natural potato starches to sugars and alter taste and texture.

How Long Do Potatoes Last?

Stored correctly, potatoes will keep for months. If sprouts appear, that’s OK; simply cut them off before cooking. Toss out potatoes that have become soft, wrinkled, or damp and blackened in spots.

Gluten is a protein that is only found in grains. Like other vegetables, potatoes are 100 percent gluten-free.

The simplest way to distinguish between potato varieties is to think of them in terms of starch content: low, medium, and high.

Low-starch or waxy potatoes are high in moisture and have thick skins and a firm texture. They hold their shape when cooked but can turn gummy if mashed. They’re your best bet for roasting, boiling, steaming, and skin-on potato salads. The following are the two most common types of low-starch potatoes.

New Potatoes/Baby Potatoes: New potatoes or baby potatoes are small, thin-skinned spuds that are harvested before they fully mature, when the plants’ leaves are still green. They are sometimes sold by variety, with names like “Ruby Gold” and “Dutch Yellow.” The new potato season runs from November to June.

Red-Skinned Potatoes: The most readily available waxy potato is firm, yet tender, with a distinctive red skin. 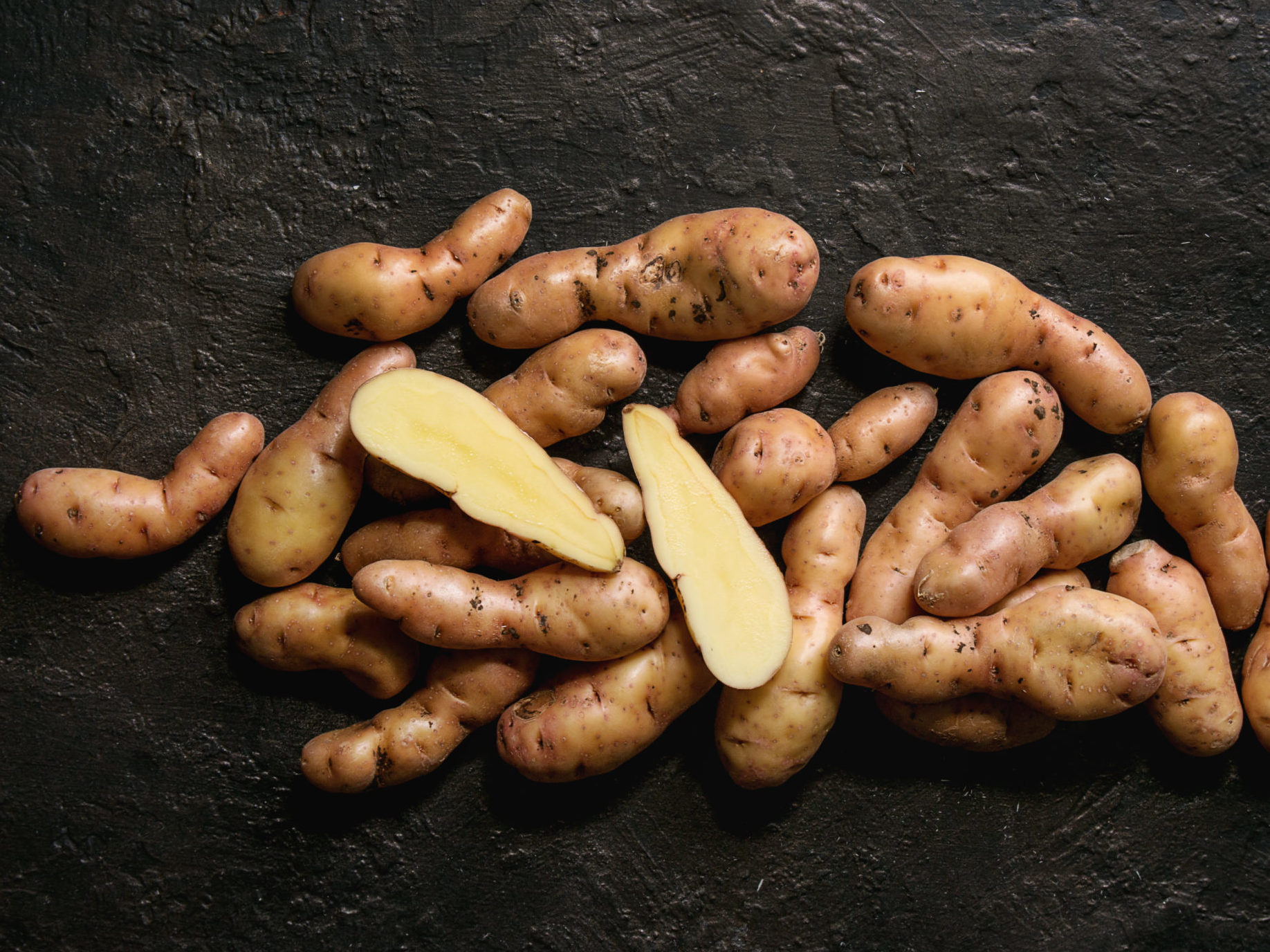 Medium-starch potatoes are all-purpose spuds with flesh that is fluffy enough to be mashed, yet firm enough to hold its shape when steamed or boiled. Most of the specialty potato varieties fall into the medium-starch category. The following are a few examples.

Fingerling Potatoes: Fingerlings get their name from their small size and elongated shape. They are prized for their creamy, flavorful, golden-hued flesh. Popular varieties include Russian Banana, French Fingerling, and Swedish peanut.

Purple Potatoes: Purple potatoes are just what they sound like—spuds with dark purple coloring that comes from anthocyanins. Small to medium in size, these thin-skinned potatoes have an intense flavor. Peruvian Purple, one of the most common purple potato types on the market, is an heirloom variety from the Andes. Other varieties include Adirondack Blue, Purple Fiesta, and Vitelotte.

White Potatoes: White potatoes have pale, smooth skin and ivory flesh that’s creamy and sweet. They’re a favorite in soups and chowders on the East Coast.

Yellow/Yukon Gold Potatoes: Yellow potatoes are beloved by cooks because they’re readily available, full of flavor, and larger than most other medium-starch potatoes. They’re a great all-purpose potato with extra color (the telltale yellow or gold) and a rich, buttery flavor. 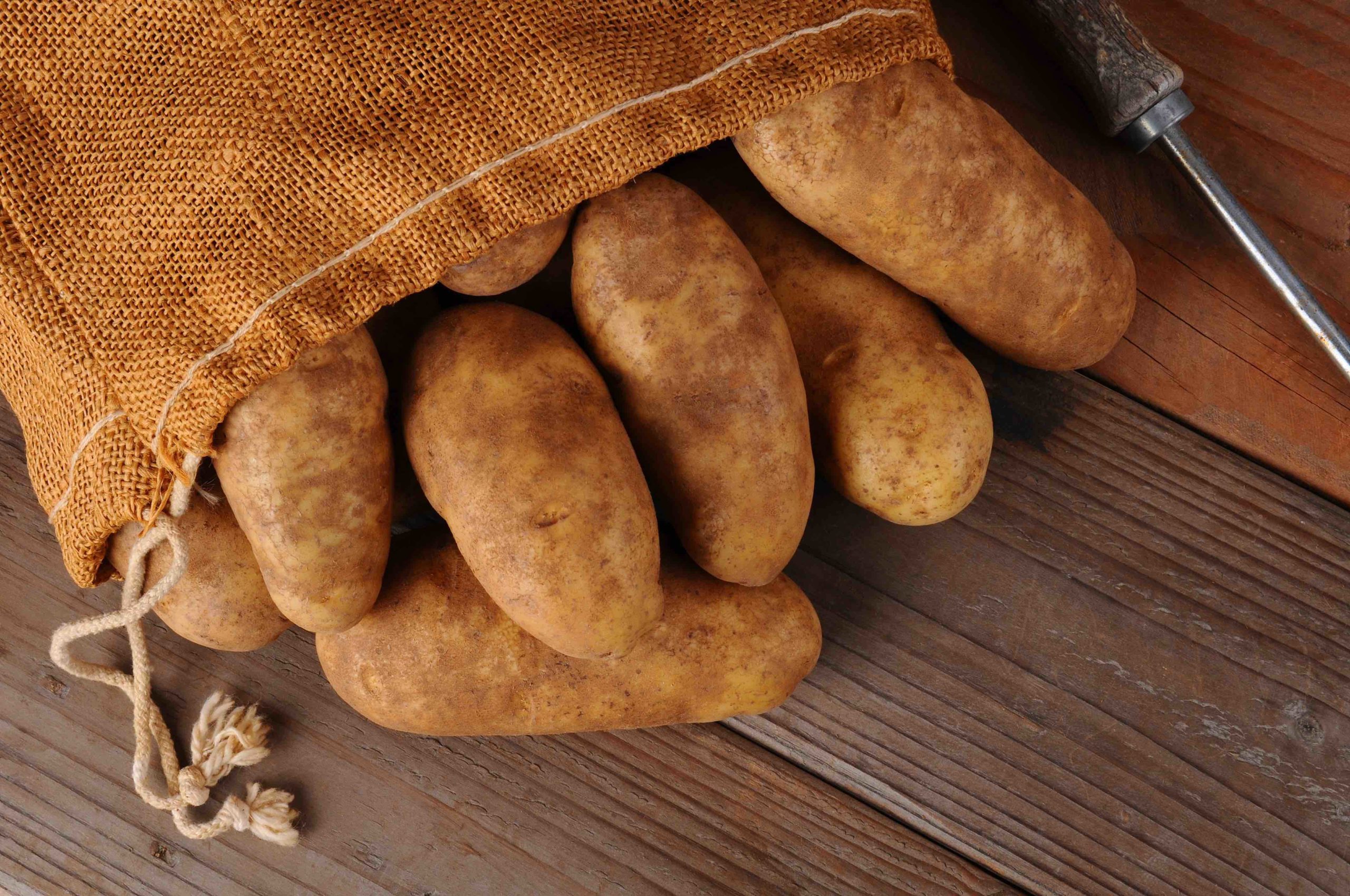 Almost all of the high-starch, low-moisture potatoes sold in North America are russet varieties. The large, elongated spuds have a grainy flesh that becomes soft, light, and fluffy when cooked. Russet potatoes are also called Idaho potatoes (when they’re grown in the Gem State) or baking potatoes. These varieties are great for baked potatoes, french fries, whipped and mashed potatoes, latkes, and blended soups.

How to Cook Potatoes

Here are some of the most common ways to prepare potatoes, with instructions adapted to the whole-food, plant-based way of cooking.

Cut russet (high-starch) potatoes into same-size slices, sticks or wedges, and preheat the air-fryer to 400˚F. Cook the fries in the air fryer 15 to 20 minutes, or until golden brown, shaking the basket every 5 minutes to allow them to cook evenly. For extra-crispy fries, prior to cooking soak the cut potatoes in a large bowl of cold water 1 to 4 hours; then drain and pat dry.

Prick large russet potatoes all over with a fork, and bake 40 minutes at 450˚F. Or microwave on high 5 minutes, or until soft to the touch. Add your favorite toppings. (Check out this Nacho Baked Potato recipe for inspiration.)

Place whole or cut potatoes in a medium saucepan, cover with 1 inch of water, and bring to a boil. The boiling time will depend on the size of the potatoes/pieces. Count 5 to 6 minutes for diced potatoes, 10 to 15 minutes for new or baby potatoes, and 20 to 25 minutes for large potatoes.

Slide potato wedges or whole potatoes onto skewers, season with your favorite seasonings, and grill 10 to 15 minutes, or until tender. Leave the skin on to help prevent the potatoes from sticking to the grill.

Place potatoes or potato chunks in the multicooker steamer insert over at least 1 cup water, and set cooking time for 3 minutes on high pressure.

Spread halved or wedged potatoes in a single layer on a parchment- or silicone mat–lined baking sheet. Roast 30 to 40 minutes in the oven at 400°F, turning occasionally for even crispness. Potatoes are also great additions to oven-roasted vegetable medleys, like sheet pan dinners.

Steam new, baby, red-skinned, and other low-starch/waxy potatoes 10 to 15 minutes, or until tender.

The basics on how to give a healthy, whole-food spin on your favorite spud recipes.

Mashed potatoes are a fan favorite at Thanksgiving tables everywhere, but they can make a wonderful alternative to grains as the base for a veggie bowl. In its simplest form, mashed potatoes are potatoes that are boiled until tender, and then crushed and mixed with milk and spices. You don’t need cow’s milk for this: Just use your favorite unsweetened, unflavored plant-based milk to give them the silky texture you want. High-starch russet potatoes are the best types of potatoes for mashing.

Latkes, or potato pancakes, are usually fried in oil, but you can get delicious, crispy results by oven-frying them on a parchment- or silicone mat–lined baking sheet for 30 to 40 minutes (turning once), or by air-frying them. Starchy russet potatoes and medium-starch varieties will yield the crispiest results.

Potato salad doesn’t have to be made with cholesterol-heavy traditional mayonnaise. Substitute homemade tofu mayonnaise, or try recipes that call for vinaigrettes, avocado, or tahini-based dressings instead. The best potatoes for potato salad are low- and medium-starch varieties that are creamy but firm and hold their shape.

Scalloped potatoes are a layered potato casserole that’s often laden with cream and cheese. You can get similarly creamy results by bathing the sliced potatoes in vegetable broth or blended silken tofu. For scalloped potatoes, use medium-starch Yukon gold, fingerling, or white varieties, which will hold their shape but release enough starch to thicken the sauce.

Slice a baked potato in half, scoop out the creamy flesh, mash it with flavorings and fillings, return that mixture to the hollowed-out potato, and broil it to golden crispness on top. Use large, evenly shaped russet potatoes or Yukon golds.

Hasselback potatoes get their name from the Hasselbacken restaurant in Stockholm, Sweden. For an oil-free version, cut a sliver off one side of each potato so that they sit flat. Then, slice thin, parallel slits in the potatoes without cutting all the way through. Place on a baking sheet, and bake 30 minutes at 400˚F. Sprinkle the potatoes with your choice of seasonings, making sure they go between each slice, and bake 20 to 30 minutes more, or until tender and golden brown. Any medium to large potato will work.

You don’t need oil to make crispy, golden fries. Try oven-frying them on a parchment- or silicone mat–lined baking sheet 15 minutes at 425˚F. Large russets or other baking potatoes are ideal.

The breakfast favorite is made with diced or shredded potatoes that are usually liberally seasoned with onions, garlic, and pepper. At FOK, we like to cook shredded hash browns in the oven at 375˚F for 15 minutes. For diced hash browns, increase the oven temperature to 400˚F, and the cooking time to 20 to 25 minutes.

Potatoes are central to a whole-food, plant-based diet, and Forks Over Knives has amassed a vast archive of potato-powered recipes over the years. We’ve rounded up our favorites for you to try: 34 Spectacular Spud Recipes to Supercharge Your Day. 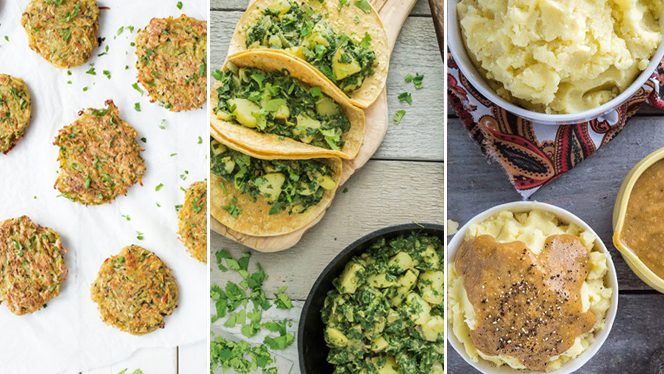 The Film That Started It All—Now Streaming for Free!

The Film That Started It All—Now Streaming for Free!

As Early as Day 3 on a WFPB Diet, I Noticed I Had So Much More Energy