Here’s everything you need to know about using the ancient grain quinoa in a modern-day kitchen, from different varieties to best ways to prepare it.

In This Article You’ll Find:

Quinoa (pronounced keen-wah) is a healthy whole grain that’s quick to prepare, extremely versatile, and incredibly tasty. It’s sometimes referred to as a pseudo-grain because the gluten-free seeds come from a flowering plant that is more closely related to spinach, Swiss chard, and beets than it is to other grains.

Quinoa is also known as one of the ancient grains, thanks to its long history as a staple food in South America. (Fun fact: Quinoa is also native to North America—seeds have been found in archaeological excavations from Mississippi to Ontario—but the North American varieties became extinct thousands of years ago.)

The quinoa we enjoy today remained relatively unknown outside of South America until the 21st century, when the nutritious seeds’ popularity exploded around the globe. Peru, Chile, and Ecuador remain the top quinoa growers in the world, but nowadays, the majority of their production—which has more than doubled in the past 10 years—is exported to the U.S., Canada, and Europe. This worldwide demand for quinoa has radically changed the agricultural landscape of the South American countries that produce it.

One big reason quinoa’s popularity has skyrocketed is its impressive nutritional profile. With 8 grams of protein and 5 grams of fiber per cup of cooked grains, quinoa ranks near the top of the whole grain list in terms of nutrients. Quinoa also boasts all nine essential amino acids and high levels of trace nutrients like magnesium, phosphorus, manganese, and folic acid.

But let’s face it: Quinoa wouldn’t be much of a “superfood” (another label it often gets) if it didn’t taste good! Quinoa’s flavor is faintly nutty or grassy, depending on the type you use, and less pronounced than other highly nutritious whole grains like buckwheat, amaranth, and teff. 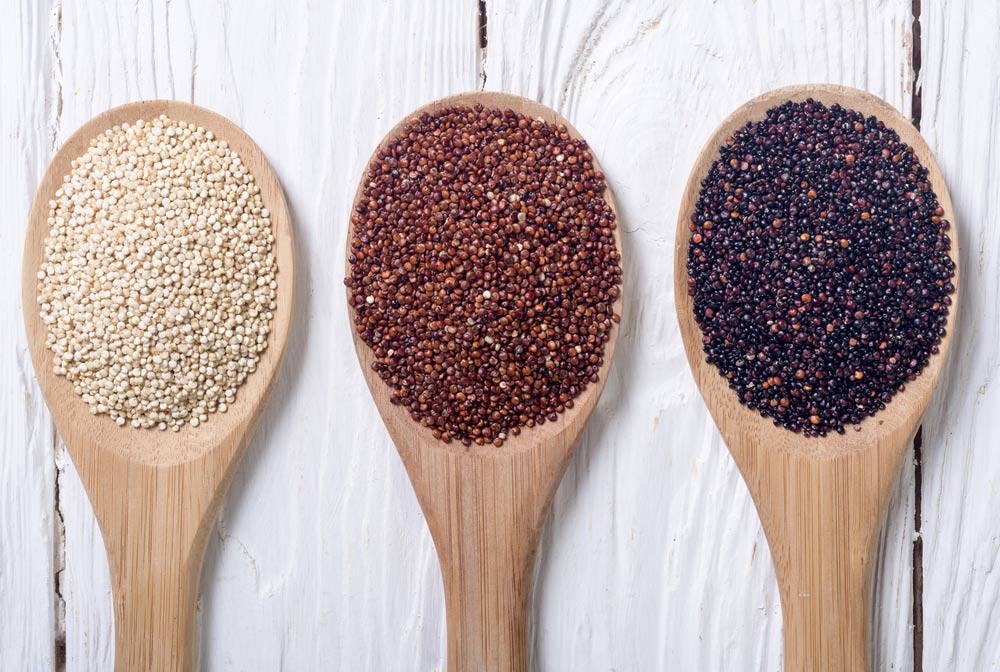 There are over 120 known varieties of quinoa, but the most readily available to consumers are white, red, and black. Here’s a quick rundown of the four different types you’ll find at the store.

White quinoa is the most common and the most versatile. The largest of the quinoa varieties, it has a mild, grassy flavor and a creamy texture.

Red quinoa is chewier and smaller than white, with a nutty flavor.

Black quinoa has the most pronounced flavor and remains firmest when cooked.

Tri-color quinoa is simply a combination of white, red, and black quinoa types.

How To Cook Perfect Quinoa Every Time

Quinoa seeds produce saponins, bitter compounds that act as a natural defense against predators. A quick rinse removes the saponins, so no trace of bitterness remains. Even quinoa labeled “pre-washed” should be rinsed, just to be sure.

Fluffy, creamy, or firm? Each of the following techniques yields a different texture.

When quinoa is fully cooked, the seeds’ germs appear like little sprouts or tails. The tails’ appearance is the best way to check for doneness.

Quinoa vs. Brown Rice (and Other Whole Grains)

Quinoa can be a great alternative to brown rice in many recipes because it cooks more quickly and has higher amounts of fiber and other nutrients. In fact, quinoa can stand in for just about any small whole grain, though you may have to adjust cooking times accordingly when it’s added to a soup or stew.

The only downside to using quinoa in a whole grain recipe is that it won’t soak up sauces or thicken stews as well as starchier options like rice or barley. One way to enjoy the best of both worlds is to combine quinoa with other cooked whole grains for a tasty, textured medley.

Quinoa’s shape, texture, flavor, and nutritional profile make it an excellent substitute in any recipe that calls for couscous.

Things to Try with Quinoa

Quinoa isn’t just for grain bowls and side dishes. Here are a few other ways to enjoy the gluten-free grain.

Quinoa flour is a nutty, high-protein, gluten-free option for baked goods. You can even grind your own by blitzing rinsed, drained, and dried quinoa seeds in a high-speed blender.

Use quinoa flakes (usually found in the hot cereal section alongside oats) the way you’d use rolled oats in breakfast cereal and baked goods.

Add cooked or raw quinoa to bread and cookie dough. Use leftover cooked quinoa to add texture to fritters and pancakes. 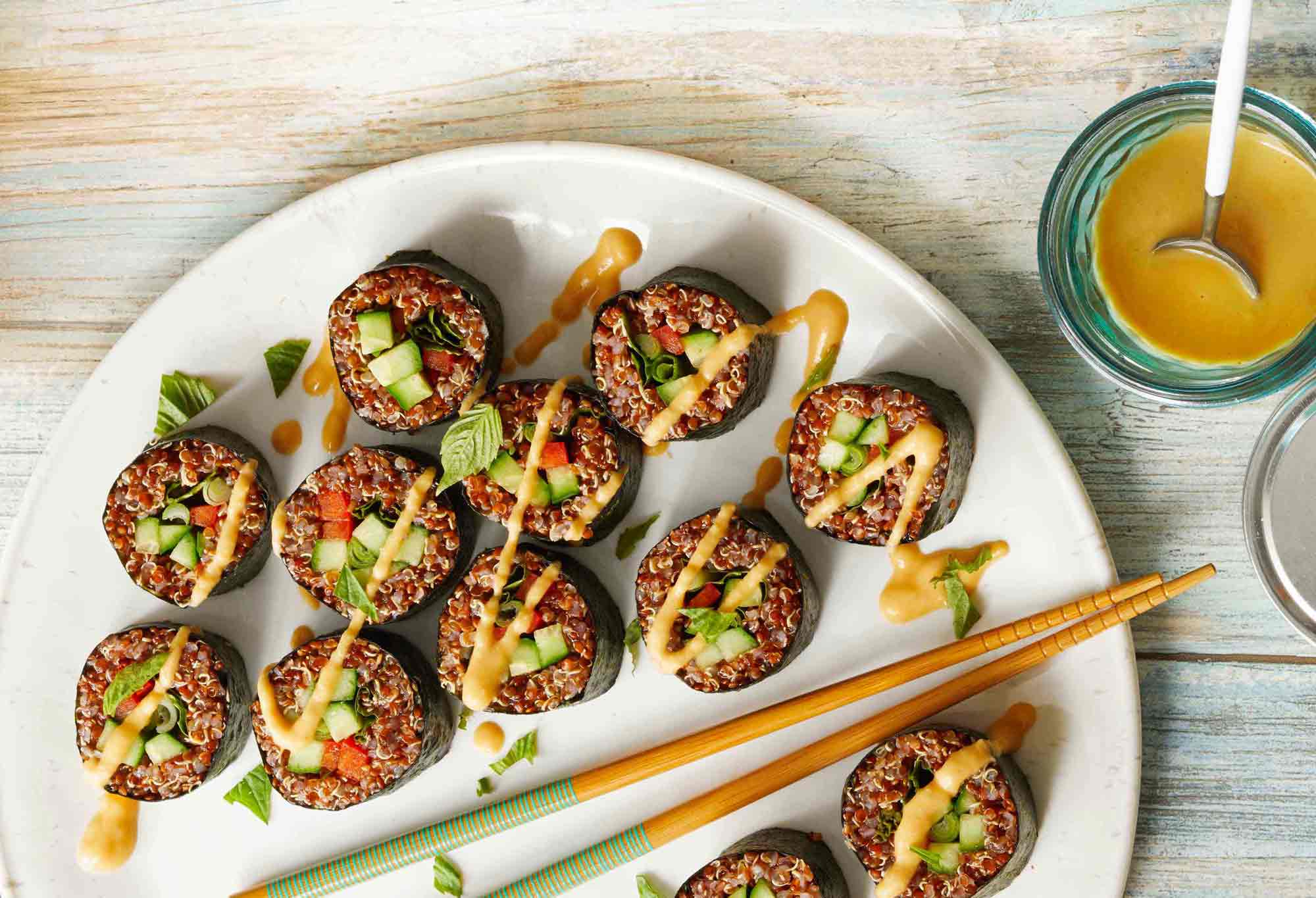 To help you get started, we’ve rounded up some of our favorite quinoa recipes—from baked goods to salads, soups, sushi, and more—that will make you love the grain.

For more guidance in healthy cooking, check out Forks Meal Planner, FOK’s easy weekly meal-planning tool to keep you on a plant-based path. To learn more about a whole-food, plant-based diet, visit our Plant-Based Primer.